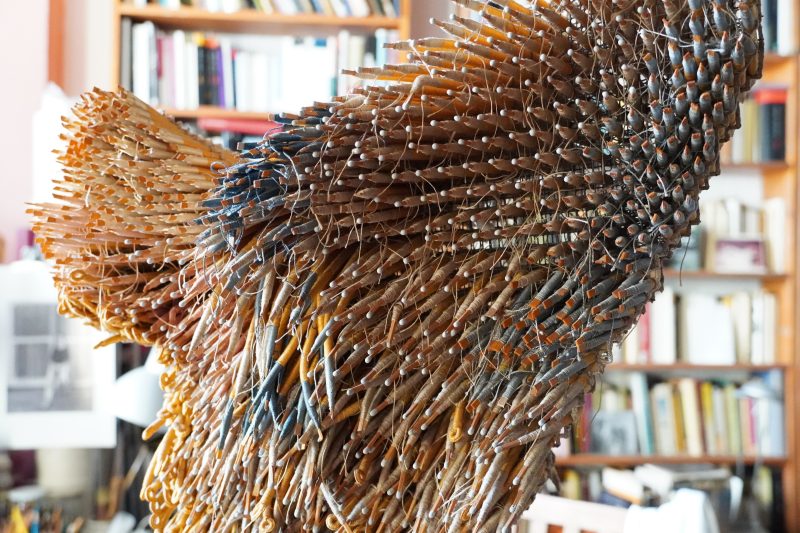 The section at risk is a research project by Lola Lasurt (Barcelona, 1983) based on the work The Nature of the Beast by Goshka Macuga (Warsaw, 1967). Lasurt’s research focuses on the popular arts and crafts section of the Spanish Pavilion at the 1937 Paris International Exposition, while at the same time inviting different local artisans and artists to teach a series of workshops at the Fundació.

Working with the participants, each workshop is designed to produce objects that could be linked to each of the disciplines included in the popular arts section of the Pavilion: ceramics, basketry and textiles. In this third and final workshop, Marga Ximénez will undertake a historical survey of the art of tapestry up to the present day, and will describe her transformation of this craft into a vehicle for artistic expression. In addition, with the sewing needle as their main tool, the participants will draw fragments of the interior architecture of the Fundació Antoni Tàpies.

Marga Ximénez (Barcelona, 1950) is a visual artist. She lives and works in Barcelona, Catalonia. Her sculptural installations with textile components broach the borders of tapestry by incorporating the kinds of visual speculations common to the plastic arts, often transforming objects taken from their most intimate and immediate context. From the 1990s, her discourse has revolved around the analysis of social conflicts, the position of women in contexts of violence and gender roles; in this sense, she is very much in line with Luce Irigaray’s ideas on female subjectivity. For Ximénez, the problem of identity does not end with the issue of gender, having come to incorporate it into her working methodology through the adoption of heteronyms that promote the separation of authorship, transcending the ‘I’, from her artistic production. She speaks through a multiplicity of identities, such as Yukimaro, Pia Remedios, Feliu Esteve or the Col·lectiu Puntes, among others. Her works include Bodegons de premsa (Press still lifes, 2001), which reflect on our personal role as passive spectators in the face of social conflict; and La vuitena arma (The eighth weapon, 2000), a sculptural ensemble comprising nine pieces made of cloth (like the months of pregnancy), which alludes to the violations women suffer during wars, while formally refering to the work of the eighteen-century midwife and obstetrics teacher Angélique Marguerite Le Boursier Du Coudray (1712-1794).