Vertigo Sea is a three-channel video installation that describes humanity’s relationship with the sea. The film is a narrative about human beings and nature, about the beauty, violence and precariousness of life. It raises the issues of migration, the history of slavery and colonization, war and conflict, and addresses current ecological concerns.

The work premiered at the 56th Venice Biennale in 2015, entitled All the World’s Futures and curated by Okwui Enwezor. In a distinctive and innovative style, Akomfrah explores our ability to survive in the sea from fishing to migration, slavery and the colonization of the world. Vertigo Sea combines archival material from the BBC Natural History Unit with new footage from Scotland, Norway and the Faroe Islands. It is an epic work, a poetic and moving representation of the human relationship with nature where the hypnotic beauty of ocean landscapes and marine life, or icy scenes of the Arctic, are juxtaposed with images of the slave trade, of the cruelty of the whaling industry, or the polar bear hunting, and of the crossing of the oceans of the various generations of migrants who have ventured in search of a better life.

The sea is a recurrent motif in Akomfrah’s work; the immensity of the ocean marks the scene of colonial conquests and the transatlantic slave trade, as well as contemporary migratory flows. His works are characterized by an interest in personal and collective histories, memories and hopes, as well as in cultural identities. The film also incorporates sequences depicting Olaudah Equiano (c. 1745-1797), the African slave who bought his freedom and was a pioneer of the abolitionist cause who sailed the seas, explored the Arctic and would eventually live in England, campaigning to extend the vote to the workers and publishing an autobiography that is central to the narrative about the horrors of slavery.

Vertigo Sea will be accompanied by the single-channel video installation Peripeteia (2012), which takes as its starting point two portraits painted by Albrecht Dürer, Kopf eines Negers (Head of a Black Man, 1508) and Porträt der Afrikanerin Katherina (Portrait of the African Katherina, 1520). The mysterious identity of these two characters leads to a reflection on the universal dimension of suffering, defeat and past memory that generates knowledge of the present.

John Akomfrah (1957), born in Accra, Ghana, lives and works in London. He co-founded the Black Audio Film Collective in London in 1982 with David Lawson and Lina Gopaul, among others, with whom he continues to work at Smoking Dogs Films. His video installations are multichannel visual compositions that deploy contrasts and dialogues between image and sound, between reality and fiction, where the montage, as he says, brings to light ‘unconscious relationships between the subject and the historical forces’.

Other recent works by Akomfrah are Mnemosyne (2010), on the experience of migration to Britain; The Unfinished Conversation (2012) and The Stuart Hall Project (2013), on the life and work of cultural theorist Stuart Hall; Tropikos (2015), on the British colonial past in Guinea; Auto Da Fé (2016), on religious persecution; Precarity (2017), the drama of musician Charles Joseph “Buddy” Bolden, the diaspora and the legacy of creativity and the creation of modern jazz; Purple (2017), which deals with the impact of humanity and industry on nature and the planet and Four Nocturnes (2019), presented at the Ghana Pavilion of the 58th Venice Biennale in 2019, which, together with Vertigo Sea and Purple, forms the trilogy of films that explore the complex relationship between the destruction of the natural world and our own destruction. 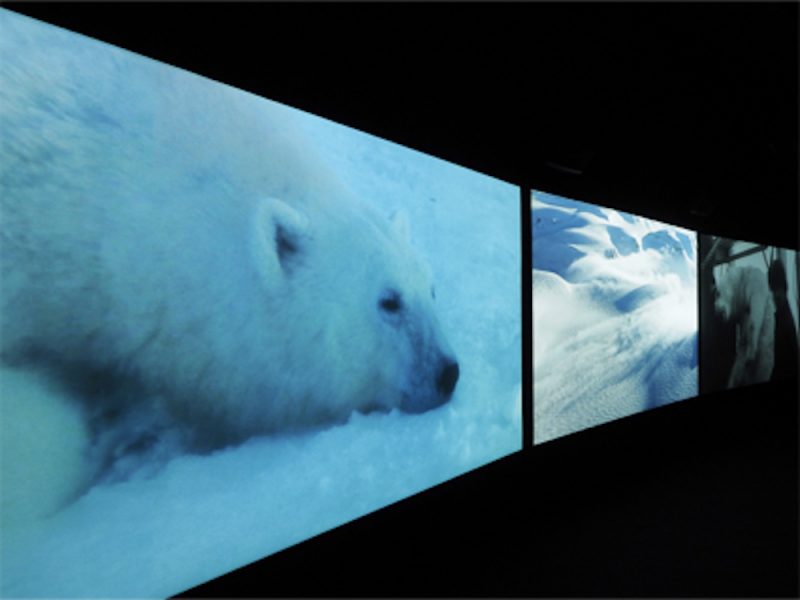