This exhibition brings together the films and installations of an author recognised as a filmmaker, artist, critic and activist and as a seminal figure of the second half of the twentieth century.

In collaboration with the Institut Valencià d’Art Modern, the Fundació Antoni Tàpies presents the second part of a project that revisits Farocki’s early militant films from the 1960s, as well as the video installations he produced from 1995 on. While the selection at IVAM focuses on Farocki’s research on the surveillance image, the operational image and the technologies of vision, the Fundació Antoni Tàpies will present a series of emblematic works that analyse forms of labour arising from traditional production modes as well as from the demands of capitalist production focusing on changes in labour processes and their representation in contemporary societies.

The notion of empathy, taken from a text by Harun Farocki, guides the selection of works to be presented in Barcelona. While from the 1960s on, Brecht’s distancing effect imposed a need for de-romanticization and objectivity in documentary practices, towards the end of his life Farocki questioned why the precious term “empathy” had been handed over to the enemy, i.e. to mainstream cinema and the entertainment industry. Harun Farocki called for its reconsideration and re-appropriation: for Another Kind of Empathy. We regard Farocki’s particularly patient and non-judgmental use of the camera as a tool for filming people at work and work spaces without interference or manipulation as a precious proof of his empathic skills. Complementing this selection of works driven by Harun Farocki’s interest in the world of labour, the Fundació Antoni Tàpies will present, for the first time in Spain, Farocki’s final long-term project, realized together with Antje Ehmann: Eine Einstellung zur Arbeit / Labour in a Single Shot.

From 2011 to 2014, Farocki and Ehmann conducted workshops with filmmakers and artists in 15 cities all over the world. Taken together, these workshops produced more than 400 one- to two-minute long films on the subject of labour. The exhibition on view at the Fundació Antoni Tàpies includes a selection of fifty-four films from nine cities. These short single-shot films exemplify the manifold kinds of labour that co-exist in the world today: material or immaterial labour, paid or unpaid work, occupations traditional or novel. The chosen works by Harun Farocki as well as the films selected from Labour in a Single Shot reveal that cinematic scenarios can be found wherever a pedagogy of the image exists. They are founded on the assumption that an image is never innocent, but rather part of a historically changing visual culture and its image regimes.

Three film programs that focus on different aspects of Harun Farocki’s film oeuvre – “Image Critique”, “Working with Words” and “Other Cultural Producers” – will give visitors the opportunity to delve deeply into Harun Farocki’s work. The films will be shown in Valencia this spring, and in Barcelona and Madrid the upcoming autumn.

Antje Ehmann and Carles Guerra will continue the project of working with Harun’s work with a third exhibition, to be titled Harun Farocki. Materials. This show will open in autumn 2017 in the NBK exhibition space in Berlin, and will be accompanied with a complete retrospective of Harun Farocki’s films at the Berlin Arsenal Cinema. 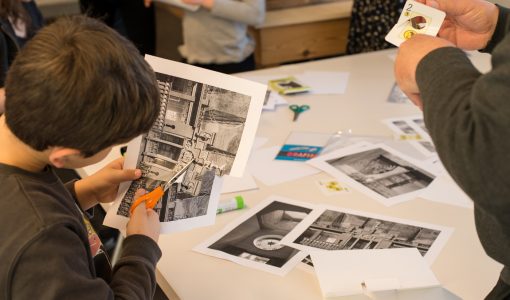