The Nature of the Beast. Activation of the round table

The Nature of the Beast. Activation of the round table 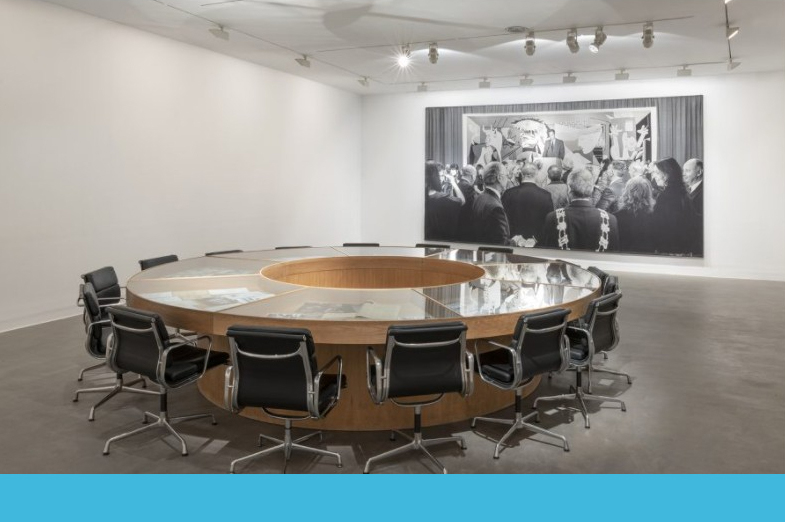 The Nature of the Beast (2010) is an installation created by Goshka Macuga for the Whitechapel Gallery, London. In this work the artist refers to two historical moments in the life of Picasso’s Guernica: the exhibition of the painting at the Whitechapel Gallery with the propagandistic aim of raising funds for the Republican side during the Spanish Civil War; and the tapestry reproduction that has hung since 1985 outside the Security Council at the headquarters of the United Nations in New York, where it was covered to coincide with Colin Powell’s lecture in defence of the war in Iraq, and where it has recently been reinstalled after having been withdrawn by the Rockefeller family for almost a year.

In 2009, Macuga took advantage of the fact that the UN was closed for renovation to borrow the tapestry for her project at the Whitechapel Gallery. Once there, she organised a meeting with people from the artistic and financial world in London, with the UN tapestry as a backdrop. One of the photographs of this event was also reproduced as a tapestry and became a central element of The Nature of the Beast installation.

The other important element is a round table where material documenting the Guernica exhibition in London in 1939 and the presentation of the tapestry reproduction in 2009 are displayed. Macuga conceived the table as a place where meetings and debates could be held throughout the exhibition’s duration. The only requirement was for any group or association that might use it to leave a document, such as a certificate or a photograph, related to the meeting.

People interested in organising a meeting in this space must send an email stating their motives at: inscripcions@ftapies.com.

For information and booking: inscripcions@ftapies.com