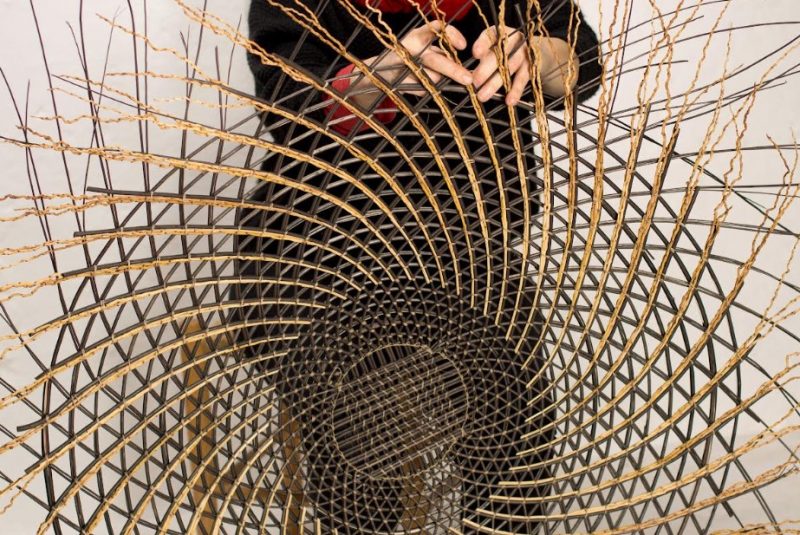 Workshop No. 2: Basketry and esparto grass section, by Mònica Guilera

The section at risk is a research project by Lola Lasurt (Barcelona, 1983) based on The Nature of the Beast, a work by Goshka Macuga (Warsaw, 1967). Lasurt’s research focuses on the popular arts and crafts section that was included in the Spanish Pavilion of the Universal Exposition held in Paris in 1937. To this end, she has invited local artisans to conduct a series of workshops at the Fundació.

In each workshop, the participants will make objects relating to each of the disciplines included in the popular arts section of the Pavilion (pottery, basketry and an exhibition of popular textiles). Each participant will make a functional piece similar to a bread basket. During the workshop, Lasurt will discuss the development of her research in relation to the crafts exhibition held at the Pavilion.

Mònica Guilera (Barcelona, 1960) lives and works in Vilanova i la Geltrú, where she learned the trade of basket weaving according to the Catalan tradition of combining wicker and cane as essential materials. One of her specialities is a traditional Mediterranean technique for making fishing traps. All the materials she uses are grown locally, combining rigid materials such as cane and stems of willow or olive branches, with soft materials such as straw, esparto grass, reeds and bark. She has participated in various exhibitions, such as Rajoles and trades (Centre d’Artesania de Catalunya, Barcelona, 2020), Natürlich Schön and Tight Lines (Galerie Handwerk, Munich, 2019 and 2017 respectively), New Spirals (Höyry-galleria, Korpilahti, 2016) and Frughtkurve (Frilandsmuseet, Lolland, 2014), as well as fairs around Europe.

She teaches regularly at the Associació Catalana de Cistellers i Cistelleres (Catalan Association of Basket Weavers), and conducts occasional basket weaving workshops at Escola Agrària de Manresa; Museu de la Pauma, Mas de Barberans; LaFundició, Bellvitge; Duduà, Barcelona; Staatliche Berufsfachschule für Flechtwerkgestaltung, Lichtenfels; École Nationale d’Osiériculture et de Vannerie, Fayl-Billot; Akademie Flechtsommer, Dalhausen; and The Basketmakers Association, York. Since 2014, she has been running, together with Tim Johnson, the projects Ports i mans and Cortines at the Centre de Desenvolupament Rural Museu de la Pauma, Mas de Barberans, as a result of a collaborative residency based on gathering and experimenting with the local vegetation throughout the four seasons of the year. Guilera has won prizes at the International Basketry Fair in Salt (Girona, 2016); The Basketmakers’ Association Basket of the Year Competition (The Basketmakers’ Association, York, 2016); and at the 5th International Competition of Vegetable Fibres (Mas de Barberans, 2012).

Activity within the Revisions cycle of the exhibition Goshka Macuga. In Flux