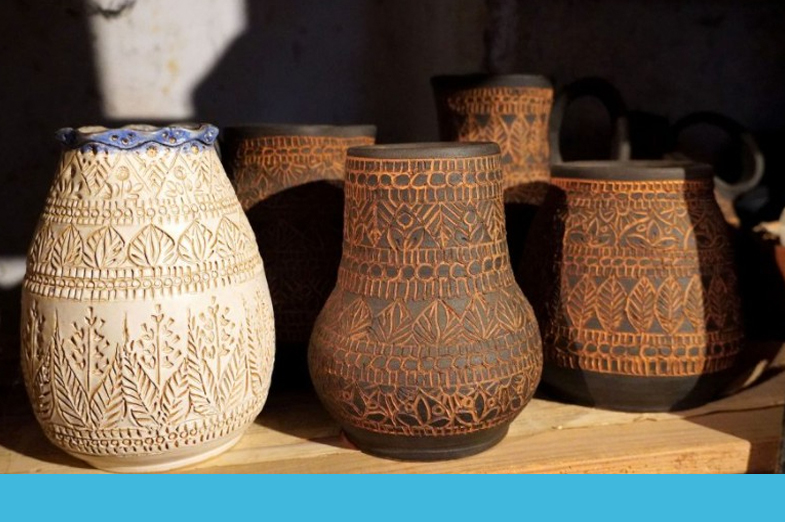 The section at risk.

The section at risk is the research project that Lola Lasurt has developed in relation to the work The Nature of the Beast by Goshka Macuga. It focuses on the popular arts and crafts section of the Pavilion of the Spanish Republic at the Universal Exposition in Paris in 1937, while inviting different local artisans and artists to give a series of workshops in the same space of the Fundació where Macuga’s exhibition In Flux is being held.

In each workshop, participants will produce objects linked to the different disciplines included in the popular arts section of the Spanish Pavilion in Paris in 1937 (ceramics, basketry and an exhibition of popular textiles).

The first workshop will be led by the ceramist Esther Guillén (Lleida, 1943), who opened her ceramics studio in the mid-1970s in the small town of Santa Pau (Girona).

Guillén will give an introductory workshop on flat pottery using ancient techniques, such as engobe, where different black-and-white slurries are applied to the clay, incision techniques inspired by cuneiform writing and the interaction of clay with other minerals such as volcanic gravel (from the Olot plain, where Santa Pau is located). Guillén will share her knowledge of ancient decoration techniques, often developed by women making utilitarian objects with the most basic tools.

Working directly with clay, Guillén will talk us through the artistic projects she has developed since the 1960s, while Lasurt will bring us up to date on the state of her research.

Esther Guillén was born in Lleida in 1943. As a child, her family moved to Barcelona where they opened a small clothing business. Rather than join the family concern, during the 1960s she studied painting and ceramics at the Escola Massana and became a student of the ceramist Angelina Alós at the Escola del Treball. Later, she shared a studio in Barcelona’s borough of Vallcarca, and soon began to take part in exhibitions in Badalona, ​​Terrassa and La Garriga, as well as Barcelona. In the late 1970s, her work was consolidated with pieces such as Dona and Fruit (Woman and Fruit, c. 1979), where she combined working with clay and textiles.

In 1977, while pregnant with her second child, shortly after, she and her partner, also a ceramist, relocated to Santa Pau (Girona). Here, they opened a street-level studio where they could make their own work while selling handcrafted pottery directly to a broader public. These objects are made with different ornamental incision techniques using discarded materials and simple improvised tools, which, at the present time, relate directly to the area of La Garrotxa.