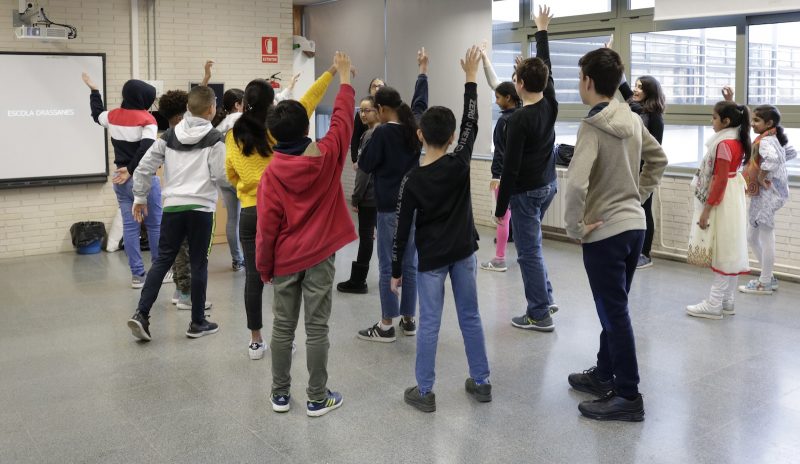 During the 2019–20 academic year, the Department of Education and Public Programmes of the Fundació Antoni Tàpies has conducted the educational project ‘body word object x Tàpies‘,conceived and developed by the A Bao A Qu Association with the participation of Isabel Banal (visual artist), Antoni Clapés (poet) and Àngels Margarit (dancer and choreographer). These three creative artists have devised dialogues with the work of Antoni Tàpies based on visual art, poetry and movement together with students and teachers from Year 6 of Primary School Drassanes, Year 1 of ESO of the Institut Escola Artístic Oriol Martorell and Year 4 of ESO of the Institut Moisès Broggi.

Open to anyone interested, in this seminar we will discuss these processes with the organisers of the project, and offer them to other centres as engines of educational research.

This activity is part of the Fundació’s thirtieth anniversary celebrations. With this seminar, our Department of Education and Public Programmes aims to promote educational research by stimulating work through long-term projects.

Given by the A Bao A Qu Association and the Fundació’s Department of Education and Public Programmes.

Workshops by the artists:

The workshops will take place in small groups. All participants will attend the three workshops on a rotating basis throughout the day.

Continuation of the workshops.

Continuation of the workshops.

In dialogue. Conclusions and closing of the seminar.

A Bao A Qu is a non-profit cultural association dedicated to the creation and development of projects linking artistic creation and education. Founded in 2004, it introduces artistic creation to primary and secondary schools through the participation of filmmakers, photographers, artists and other creators.

A Bao A Qu has developed several European projects, including Moving Cinema and CinEd . In 2015, it was awarded the City of Barcelona Visual Arts Prize.

Isabel Banal i Xifré (Castellfollit de la Roca, 1963) is a visual artist and teacher at the Escola Massana. She was awarded a scholarship to the Spanish Academy in Rome (2013–14).

Antoni Clapés (Sabadell, 1948) is a poet, translator and poetry editor.

He has translated about thirty books, including much poetry from French (Philippe Jaccottet, René Char, Denise Desautels, Nicole Brossard, etc.), and from Italian (Pietro Civitareale, Remo Fasani). And the prose of Paul Valéry, Jean Cocteau, Jules Renard and Marguerite Duras.

Àngels Margarit. Since the late seventies, she has participated in different aspects of dance, as a dancer, pedagogue and choreographer.

In 1985, she began her career with her company Àngels Margarit/cia. MUNDANCES and created her own projects, which included productions for the stage, site specific events, improvisation, dance video, installations and research into new media.

Her work has a high international profile and has been co-produced and presented in festivals and programmes around the world.

Since the beginning, Margarit has developed a very personal creative style that has made her one of the benchmarks of dance in our country. Throughout her career she has received numerous prestigious national and international awards.

As a pedagogue, she regularly teaches courses, workshops and repertoire in schools and centres throughout Europe. She has created and/or collaborated in various pedagogical programmes for different institutions.
Since March 2017, she has been director of the Mercat de les Flors, the ​​home of dance in Barcelona.


Organised by the Fundació’s Department of Education and Public Programmes, the A Bao A Qu Association, together with Isabel Banal (visual artist and sculptor), Antoni Clapés (poet) and Àngels Margarit (dancer and choreographer).

Seminar open to teachers and anyone interested in educational processes.

Prior registration required (before October 29): actividades@ftapies.com