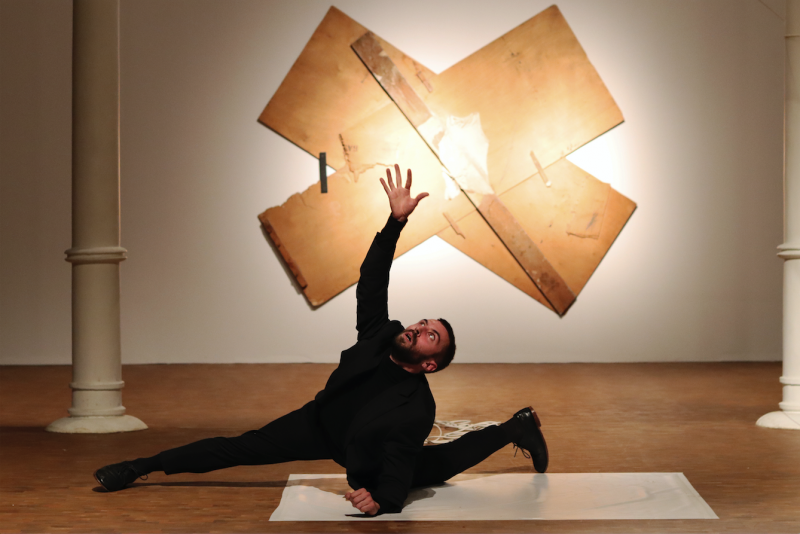 This show takes as its starting point a questioning of existence and the place human beings occupy in the universe. Removed from their roots, protected by an artificial world, human beings seek security and the meaning of life, positioning themselves in a collective delirium, over and above everything that surrounds them. And yet, they are forever enslaved to their minds, something that distorts their vision and understanding of the world, while feeding false expectations and insecurities. Humans forget that survival often depends on actions that go beyond mere existence, and that they are not the beginning or the end of anything, but a small part of a cosmic dance.

Much of Antoni Tàpies work and ideas addresses philosophical questions related to existence. Tàpies saw reality as a whole in which the individual is part of the universe and the body is never separate from space. In an attempt to fight nature’s antagonistic, hostile and conquering character, he defended the need for identity and collaboration. Influenced by Buddhism, he advocated a unifying view of the universe and all the beings that are part of it.

Bunker is an artistic proposal and the first solo work by the dancer and choreographer Aleix Martínez (Barcelona, 1992) together with the ManNera Dansa company (Hamburg). Aleix Martínez made his debut as a choreographer in 2012 with Trencadís, a work created for the Deutsches SchauSpielHaus, Hamburg, for which he received the Tanz Award in the category of ‘Young Talent’. Since then, he has collaborated independently with various festivals, institutions and companies, creating Le Surrealisme, c’est moi, 2014, for the Sant Pere de Rodes Festival; Orígens, 2015, for the Gong Festival; and Horizons, 2018, a humanitarian project in support of Open Arms. In 2019 he was commissioned to represent the Hamburg Ballet in London with Seelen Spiel, a work especially produced for the reopening of the newly-refurbished Linbury Theatre. Shakespeare Sonnets, his first work for the Hamburg Ballet, was premiered in July 2019, opening the 45th edition of the Hamburger Ballett-Tage annual festival.